When ordering products for your boat, it makes it easy when you know the particulars of what this and that is called. In the office, talking to boaties all day long, we’ve realised how common it is to call different parts of a boat the wrong terminology, so we’ve listed the top three mistakes to help you know your boat better.

The keel is the centre beam where the bottom side plates join. Some boats have a visible keel, and some boats have an internal keel – a strengthener. The benefits of a prominent keel are added directional control, like a small surfboard fin.

The top rail around the edge of a boat is the gunwale–where your rubbing strip is located. It’s a strangely spelt word, like it has something to do with shooting whales. Actually, it has an interesting 700 year origin. In the late 15th century, a “wale” was an upper plank on a ship. The Old English word gun (“gonne”) was added, because the outer ridge (wale) of a warship was where the guns were mounted. “Gonne wale” has become “gunwale” over time, and now that people have spelt it the way it’s pronounced so often, “gunnel” (like funnel) is now a recognised alternative spelling.

The most commonly mispronounced term (many will say “chime”) of boat is actually becoming well known in boat terminology. When we started Kapten Boat Collars, ten years ago, few knew what we were talking about, when we explained the Collars sat on the chine. However, as newer boat builds incorporate reverse chines into their designs, the advertising has spread the news about what and where they are.

So, there we have it, a little trivia about boating terms that we hope you thought was as interesting as we did when we put this together. Now, we’ll never think about shooting whales when we mention gunwales, and maybe we’ll even start spelling it “gunnels.” Maybe.

What boat parts do you find are the most often misunderstood? 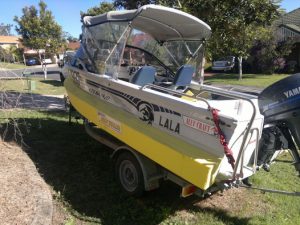 The Kapten Boat Collar is the best investment towards my family and friends (and my own) safety… I installed it all by myself and it was easy to follow your instructions. My first trip out was an eye opener, the last time I felt this safe was 10 years ago when I still had a 6 man…

4.2m commercial-use Allycraft: “A much safer and predictable ride”

Hello Pat. It is worth noting that [our] vessel is in survey for 5 people, one more than the boat compliance plate states. The boat has dramatically improved stability. In fact it is fair to say that from a stability perspective it is more like a tri hull and, as I have previously owned and extensively…

4.2m Quintrex Busta: “Can’t believe the difference in the handling”

Hi Pat Can’t believe the difference in the handling of my little boat now with the boat collar. I took my wife and two kids for the first sea trial yesterday arvo, and from the [start], just boarding the boat the kids didn’t do the usual, and fly across the boat just because I [was]…